After getting settled on the opposite side on the country, Rei arrives to start her research in the Engle lab at Scripps. A legendary Head Manager for the mens’ varsity basketball team, Rei completed her undergraduate degree at Princeton University and completed research under the guidance of Prof. Robert Knowles in the field of asymmetric catalysis. Excited to put her skills to the test, she was quick to prepare her hood for many columns to come.

After enduring a long trans-Pacific flight, Mingyu lands safely in San Diego and eagerly begins research in the Engle lab. Prior to moving to the wild, wild West Coast of the United States, Mingyu completed his undergraduate studies at Nankai University, where he studied transition metal catalysis in the research laboratory of Prof. Bing-Tao Guan. In pursuit of new frontiers in catalysis (and tasty Japanese food), Mingyu also spent six months in the research lab of Prof. Zhaomin Hou at RIKEN in Japan, where he explored rare earth metal catalysts for novel C–H functionalization reactions.

After finding a new (used) convertible fit for cruising up and down the San Diego coastline, Andrew arrives to begin his research in the Engle lab at Scripps. An accomplished metal worker, who has been known to forge a mean sword and shield if you ask nicely, Andrew completed his undergraduate degree at Caltech, where he developed new silylation methods with Prof. Robert H. Grubbs. He also honed his organometallics skills as a SURF student at ICIQ with Prof. Vladimir Grushin studying Cu–CF3 complexes.

After surviving TSRI LSSI boot camp and navigating her way through traffic on the I-5 from Southwest High School, Daizy De La Torre was eager to start discovering the world of organic chemistry in the Engle lab, beginning with Thin Layer Chromatography. 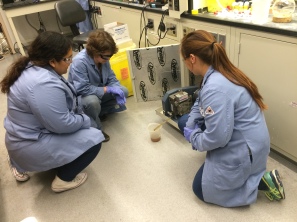 Taking a break from life at Maranatha Christian High School, Jessica Xu joins the Engle lab for 7 weeks of summer. Having cleaned her hands from helping the lab with many high-vac oil changes, she jumped right into compound purification by Column Chromotagraphy. 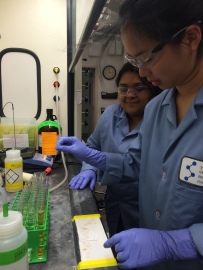