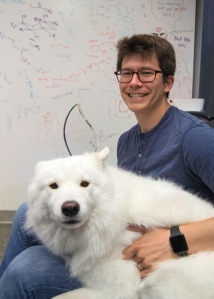 Keary graduated Phi Beta Kappa and summa cum laude from the University of Michigan, where he carried out research with Prof. Adam J. Matzger. During undergrad, he spent one summer with Prof. A. Stephen K. Hashmi at the University of Stuttgart as a DAAD RISE Fellow, and then spent the year after graduation performing research with Prof. Manfred T. Reetz at the Max-Planck-Institut für Kohlenforschung as a Fulbright Scholar and with Prof. Jan E. Bäckvall at Stockholm University as an IDECAT Exchange Fellow. He completed his graduate work jointly at The Scripps Research Institute with Prof. Jin-Quan Yu and the University of Oxford with Profs. Véronique Gouverneur and John M. Brown, earning a PhD in Chemistry and a DPhil in Biochemistry. During grad school, he also carried out summer research with Prof. Kyoko Nozaki at the University of Tokyo as an NSF/JSPS EASPI Fellow. After completing a two-year appointment as an NIH Postdoctoral Fellow with Prof. Robert H. Grubbs at Caltech, Keary joined the Department of Chemistry at Scripps Research as an Assistant Professor in the summer of 2015 and was promoted to full Professor in 2020. His research interests lie at the interface of organometallic chemistry, organic synthesis, and catalysis. Outside of the lab, Keary enjoys running long distances, eating fried chicken, drinking good beer, and spending time with his wife, son, and fur daughter.